Showing posts from June, 2016
Show all

June 29, 2016
Domestic abuse Before I left the hostel I stayed in, I happened to meet a retired psychotherapist at the lounge where I was chatting with a bunch of girls who've been traveling. I asked about his work and he said he worked with violent men who had abused or assaulted their partners or ex-partners. He mentioned that according to a CDC study his work led to men not going back to violence 75% of the time. That is, if a man court ordered to do this 3 to 6 month long program, stayed in it, he did not go back to violence 75% of the time. The ones who went back typically belonged in 2 categories: 1. the ones who had been extremely violent before the program, and 2. the ones who binge drank (> 5 beers, or 5 shots of hard alcohol at one time) Since this was a bunch of young girls, he asked: "So, do you know who to stay away from?". "Who?" "Men with control issues and men who drink too much". I asked for clarification about how young girls would i
Post a Comment
Read more

June 29, 2016
Gender Based Violence Thursday, the final day of the ‪#‎ Gender360Summit‬ , was about how to prevent gender based violence (GBV) on adolescents and the challenges in doing that. It was stated that violence against women and girls was ultimate abuse of power is one of the most heinous and prevalent human rights abuses. Some drivers of gender based violence: 1. Patriarchy, resulting in practices such as female foeticide and infanticide 2. Gender norms: needing to preserve culture and tradition with dehumanizing norms such as early marriage, female genital mutilation 3. Masculine norms of behavior: dominance and control There was a talk about violence against children in schools and how this could be changed by changing the way we speak about schools: RaisingVoices There was a lot of discussion about how to bring adolescents to the table to design, run, evaluate and improve their programs. I found this hard to imagine doing well in a context where adolescent girls are hidd
Post a Comment
Read more

June 29, 2016
Programming for Adolescents I was at the ‪#‎ Gender360Summit‬ today, on Engaging Adolescent Girls and Boys in Achieving Gender Equality and Combating Gender-based Violence. This was a side summit to the ‪#‎ StateOfWomen‬ summit I attended yesterday. I met a wide variety of people today. Folks who work on dealing with victims of gender based violence, folks who work in refugee camps and in an oppressed border city, to provide services to children and prevent evils like child marriage and female genital mutilation. This is super hard work in super hard circumstances. I heard folks talk about adolescent education and how it was crucial for adolescent programs to be designed by them, and keep them involved them in every step of the way. Even in monitoring and evaluation, they know the best questions that need to be asked to see if change was being made in the right directions. Folks who worked in economics and said that one way to sell the idea of women working on the national
2 comments
Read more 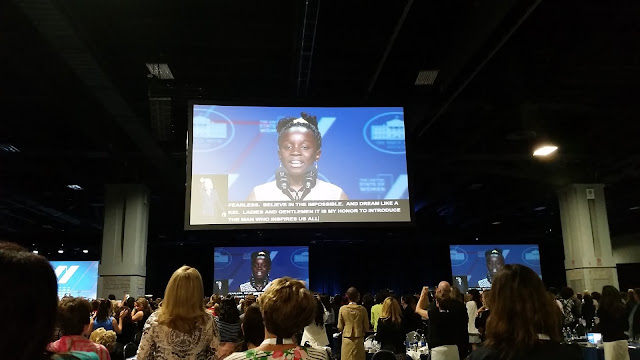 I heard Warren Buffett, President Obama, Michelle Obama and Joe Biden speak today, live at the first ever United State of Women Summit. A special mention of the two eleven-year old girls who are changing the world Marley Dias and Mikaila Ulmer. Each of these and so many others spoke with utmost clarity and conviction about their causes, dreams and realities. Here's what I remember from each talk... Joe Biden said that his dad told him that the cardinal sin was to lift a hand to hurt a women, and that it was the worst kind of abuse of power. He said it is the culture needs to change, since the laws were in place and not enough. He said his work would be done when not one woman who was assaulted ever felt guilty that it may have been her fault and not one man ever thought that a woman "had it coming". Mikaila urged us all to dream like a kid and introduced President Obama. President Obama said he knew we were all there to see Michelle, that birth control
1 comment
Read more
More posts